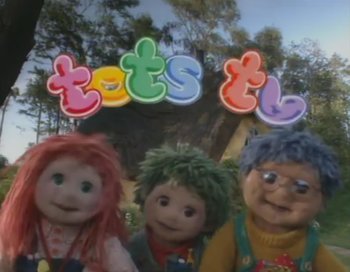 Tots TV is a puppet show for children by Ragdoll Productions (creators of Teletubbies, Brum and Rosie and Jim) for Central Independent Television, which was broadcast between 1993 and 1998.

The show is about three elf-like creatures called Tots, who live in a big secret house in the middle of nowhere. The protagonists are:

A mischievous Cartoon Creature, Furryboo, lives with the tots, too, but that's a secret! The trio have a pet donkey which they nuture, who is named, well, Donkey.

The show was first broadcast on CITV, but was also shown on PBS Kids in the United States. In the 2000s, reruns were aired on CBeebies.