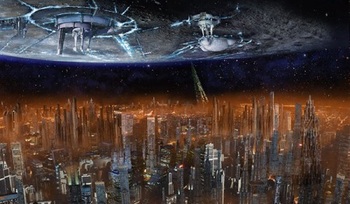 Shown above: New Angeles, the moon colony Heinlein, and the Beanstalk that connects the two.
It is the future. The World Changed. People did not.
Advertisement:

A setting by Fantasy Flight Games originally started in 2007. It consists of tabletop game Android, Android: Infiltration and the reboot of the Netrunner card game. Has spawned several series of novels, each fleshing out a portion of the Android universe.

Set in a cyberpunk future where Mega Corporations run things, clones and androids are considered less than humans, and a giant space elevator ties the moon down to Earth. Setting is currently based around the city of New Angeles where the base of the space elevator is built. Other notable locations include Moon colony of Heinlein and city grid SanSan among others. Although it may appear overly oppressive with large Megacorp controlling all aspects of life, it has themes of idealism such as Caprice Nisei the first clone to be awarded rights and a setting where ordinary people, Runners, can attempt to disrupt the Agendas of said Megacorps.

In the original Adventure Board Game: Android, A murder has occurred, and 5 detectives are working to find out who did it. A game with many mechanics, there are personal stories for each detective to make a rich story with lots of replayability.

Net Runner is an asymmetrical card game where one player play the role of a Megacorp, (choice of Haas Bioroid, Jinteki, NBN or Weyland Consortium) and the other plays the role of hacker of varying factions and ideologies. Both sides compete to score Agenda cards.

There is also a board game called Mainframe, in which six runners, also playable in Netrunner, are hacking into a Titan bank server to steal as many credits as possible. Players take turns drawing cards with shapes on them, and producing those shapes on the playing field with the goal of enclosing as much territory for themselves as possible. A new board game, called New Angeles was announced August 2016, in which players play exclusively as the Corps of the world of Android, trying to advance their agendas while coping with civil unrest.

The Roleplaying Game of the setting, Shadow of the Beanstalk, was released by Fantasy Flight Games in April 2019 and uses the company's own Genesys roleplaying system.

The franchise currently has five novels:

Unrelated to the mobile operating system.

This board game gives examples of: