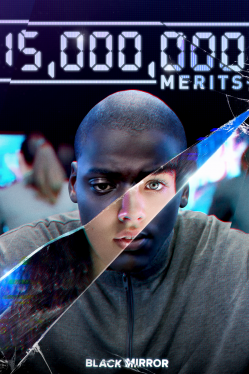 "It's not stuff. It's truth."
Bing: You've got something real.
Abi: You heard me singing in a toilet. Is that real?
Bing: More than anything that's happened all year.
Advertisement:

The only distraction in a Dystopian life of endless physical toil is a series of tedious games and TV talent shows on every screen, which people can enter at the cost of work tokens, the so-called "merits". This is not really of much concern to the citizen, Bing Madsen, however. Bing has inherited a lot of merits from his deceased brother, which he mostly uses to pay the fines for skipping the mandatory adverts he and the other citizens are frequently bombarded with. That is until he overhears Abi, a fellow worker, singing to herself in the employee bathrooms. Finding her voice absolutely beautiful, Bing thinks she might have what it takes to have a chance in the talent show Hot Shots...

To add some Take That! juice to the proceedings, this episode's premiere screening was deliberately scheduled to begin on Channel 4 immediately after the 2011 final of The X Factor had ended over on ITV1. Trailer here.