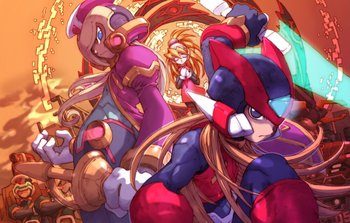 Mega Man Zero 2 is a video game created by Capcom and Inti Creates for the Game Boy Advance in 2003. It's the second installment in the Mega Man Zero series.

One year after the previous game, Zero is still wandering the desert, fighting Neo Arcadian forces that were sent to eliminate him. In Neo Arcadia, the three remaining members of the Four Guardians have covered up Copy-X's death, and Harpuia becomes de facto ruler. The Resistance has fled their old base and joined up with another faction. Circumstances allowed Zero to return to the Resistance, where he meets new members, including its new commander, Elpizo, appointed by Ciel so she can focus on her Cyber-Elf research.

The game reintroduced the EX-Skills Zero could use in the Mega Man X games. It also introduces the Form System, which changes his combat capabilities and grant exclusive abilities.