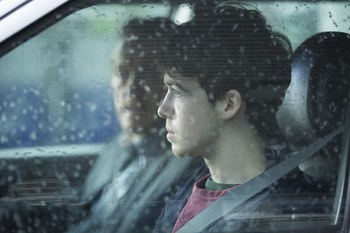 "They filmed me..."
"Pictures hang about on Google like a Gypsy fucking curse. There's no cure for the Internet, you would never go away."
— Hector

When a teenager falls into an online trap, he is forced into an uneasy alliance.

Starring Alex Lawther as Kenny and Jerome Flynn as Hector.

Tropes related to Shut Up and Dance