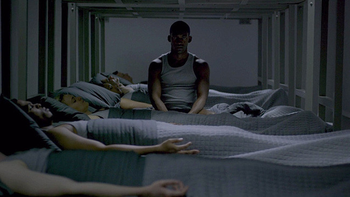 "It's easier to pull the trigger when you're aiming at the bogeyman."
— Arquette
Advertisement:

In the far future, a military force equipped with the latest technology is locked in a brutal war of extermination with a race of repulsive mutant creatures. One soldier begins to have his doubts about the nature of the enemy he's fighting and the technology being used.

Starring Malachi Kirby as Stripe and Madeline Brewer as Raiman.

Tropes related to Men Against Fire: