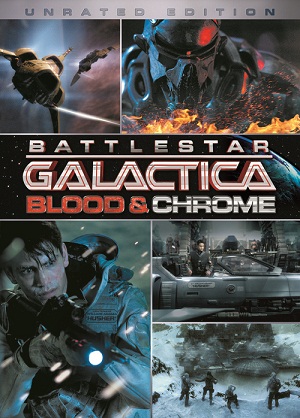 Set ten years into the Cylon War, it focuses on then-Ensign William Adama (Luke Pasqualino), who has been assigned to then-new Galactica fresh out of the academy. The irascible newbie is more than a little irritated to be assigned to be a Raptor "bus driver" rather than a Viper jock. However, things become much more interesting fast when the routine "milk run" he and his more experienced but surly co-pilot Lt. Coker Fasjovik (Ben Cotton) are assigned to turns out to be a cover for a top-secret mission involving the mysterious Dr. Becca Kelly (Lili Bordán).

It was in Development Hell for a long time, but finally made it out the door in online mini-episodes in November 2012 and a longer version aired as a two-hour pilot movie on February 10, 2013. The uncut, unrated DVD and Blu-Ray of the pilot was released on February 19, 2013.