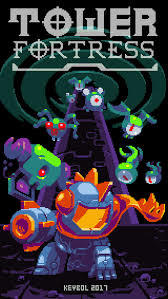 Tower Fortress is an action platformer game developed by Keybol and published by Nitrome.

The short story given: a mysterious tower suddenly appears in a village. From it an emitter emits poisonous gas that infects the town. It is up to the power armored heroine to come and save the day.