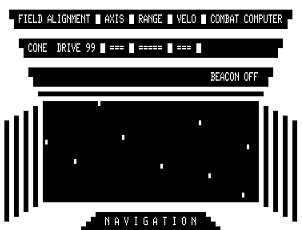 StarFighter — unofficially called SC-78503 to distinguish it from the F-104 and The Last Starfighter — was a TRS-80 game written by Larry Allen "Sparky" Starks (b.1951 – d.2011) and published in 1980 by Adventure International. To many TRS-80 afficonados, it was the best game ever put out for that platform.

In the far future, "hypercharge" technology has completely reshaped interstellar civilization, and the Solar Galactic Authority is at war with the Petro Resource Conglomerate. You, the player, are a mercenary hired out by the S.G.A. and given your own SC-78503 Starfighter spacecraft with which to vanquish the ships of the P.R.C..

Your mission consists of locating other spacecraft flying between the stars, flying in to intercept them, determining whether they are friend or foe, and then either attacking them or flying away. A hypercharge field surrounds your craft, which allows for FTL Travel and acts as both Deflector Shields and weaponry. Taking hits, firing your weapons, or flying through hyperspace drains hypercharge. A successful kill goes on your record and can be redeemed either for (A) bounty money, which you need to keep your craft fuelled, repaired, and charged; or (B) rank grade points within the military. Earn enough military grade and you get a promotion, which entitles you to install an entire extra layer of hypercharge field on your spacecraft (which you still have to pay for with bounty money). Killing friendly craft, even by accident, makes you lose military grade.

The opening screen proclaimed that the game was "Future space combat simulation number one." Numbers two and three were planned, but never written, as by that time the age of the single-author computer game was coming to an end. In a private correspondence in 2003, Sparky Starks wrote:

Starfighter was originally intended to introduce a world of 'all bad guys', depending on your perspective. PRC represented power as acquired by indiscriminate use of resources. SGA represented power as acquired by indiscriminate use of untested technology, and IMRC represented power as acquired by pragmatic prioritization of profit above all else. StarMerchant was planned as a sequel to StarFighter, to be followed by Marauder, with each perspective so being represented. But.. (smile) the computer industry moved forward faster than anyone anticipated, and before I could get out two more TRS-80 products, I was busy rewriting StarFighter for Atari 400/800 as Destiny: The Cruiser (I had sold rights to the name StarFighter to Lorimar to make a movie: The Last Starfighter, and StarCruiser proved to be already owned).
Advertisement:
Nope, I've never written anything (yet) except softwar[e] documentation but I have been considering writing one of two things: either a near-future novel about an Internet special interest group overwhelming traditional ideas about things like unions, elections, etc with widely published straw polls, or a novella sized essay arguing that we are within 10 years of being (literally) servants of computers. Its not certain, but reason suggests that computers will soon be self-aware, un-unpluggable, and likely to wish to protect us 'for our own good' (scariest thought I've every had...). Who knows.

Only 50 EPROM copies of "Destiny: The Cruiser" were ever released.

This computer game contains examples of: