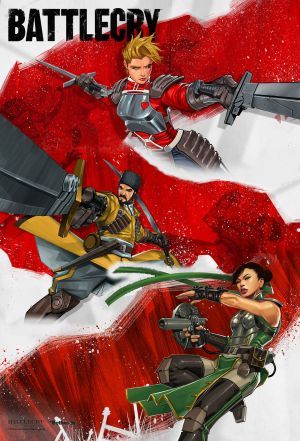 BattleCry is a now-cancelled (or at least paused) team-based Competitive Multiplayer combat game, developed at what is now Bethesda Game Studios Austin (previously called BattleCry Studios). It's a Third-Person Hero Shooter that it de-emphasises shooting - one of its points of contrast with other games is that it has greater focuses on melee combat (although some classes still do use ranged attacks).
Advertisement:

The premise of the game is that both guns and war were outlawed at the start of the 20th century, and that nations now fight each other through formalised combat between selected teams in sanctioned WarZones. Basically, Combat by Champion meets International Showdown by Proxy. There are three sides in the game: the Imperial Marines, the Cossack Empire, and the Han Republic, which respectively draw from Britain, Russia, and China (or rather, from the wider empires of those countries). The setting is described as a "world envisioned by Viktor Antonov" of Half-Life 2 and Dishonored fame. The art, which is is rather stylised, has echoes of the industrial settings of those games.

Development came to a halt in October 2015.