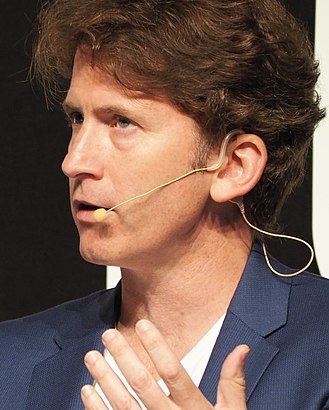 Howard in 2018
"Live another life, in another world..."
Todd's motto for Bethesda games
Advertisement:

Todd Howard (born April 25, 1971) is the director of Bethesda Game Studios, serving as the executive producer on The Elder Scrolls and Fallout series.

Howard joined Bethesda in 1994, initially working as an intern on the studio's licensed Terminator games - Future Shock and Skynet. He moved to the Elder Scrolls series starting with the CD release of Arena, then as a designer for Daggerfall, and finally project lead of Redguard and Morrowind. He was promoted to executive director with the release of Morrowind's Bloodmoon expansion pack. When Bethesda acquired the Fallout series from Interplay Entertainment, Howard was appointed executive director of that series as well.

Tends to be characterized by Bethesda fan communities as something of an endearing-but-odd boss along the lines of a Michael Scott who desperately wants you to buy multiple copies of each Bethesda game (Skyrim in particular) to the point of becoming a meme himself. Expect him to be blamed personally for anything that goes wrong in a Bethesda game (or anywhere else).

Frequently a Lying Creator, particularly in regards to The Elder Scrolls series. Fans have come to learn that the more aggressively he denies that another game in the series is being worked on, the closer an official announcement of that game likely is.