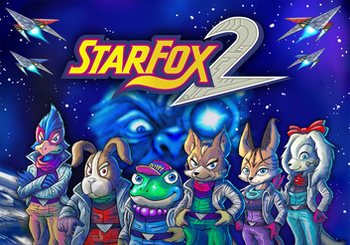 Left to right: Falco, Peppy, Slippy, Fox, Miyu, and Fay, with Andross in the background.
Star Fox 2 is the direct sequel to the original Star Fox for SNES. It is also the only other Star Fox game within that continuity; the following entry in the series, Star Fox 64, would serve as a Continuity Reboot for the franchise that would lighten the tone.
Advertisement:

Star Fox 2 directly follows the events of previous game. The planet Corneria is still licking its wounds from the first Lylat War; however, though Emperor Andross was defeated by the Star Fox mercenaries, he survived. Now, with a renewed armada and new, more powerful weapons, he plans to get his revenge by killing everyone on Corneria that wasn't killed in the first Lylat War. As added insurance, he's hired the Wolf Team note Star Wolf to keep Star Fox out of the way.

Originally completed in 1995, Nintendo proceeded to make the interesting decision of not releasing the game. The reason? The Nintendo 64 was coming out in a year, and they didn't want to risk downplaying that console's impressive new 3D technology by demonstrating any sort of 3D graphics on their last-gen system. So they tried to pretend it didn't exist. Despite the fact that the game had been heavily advertised already. After the release of Star Fox 64, Nintendo was content to quietly let Star Fox 2 fade into distant memory. The game did not go to complete waste internally, though; two-thirds of its code was recycled for 64, and some of its gameplay ideas would be revisited by Star Fox Command and Star Fox Zero.

It also didn't quite get as forgotten by the gaming community as the company may have hoped, as Star Fox 2 actually managed to snag an unofficial release in the late 90s thanks to two of the Japanese testing ROMs getting leaked online: a 1993/1994 early-development Alpha, and a 1995 late-development Beta. The latter — originally thought to be virtually complete — was missing some features, but was otherwise entirely playable using an emulator. In 2004, Aeon Genesis (of Cave Story fame) made a Fan Translation patch

for the Beta ROM that doubled as a Game Mod to fix up the bugs, and the game soon gained a reputation. So much so, that the system producer behind the SNES Classic Edition plug-and-play console requested it to be released

And so the game finally received an official release on September 29, 2017... a whopping 21 years after its original projected release date, usurping a 1998 port of Frogger as the final licensed SNES game ever released by 19 years. note In Japan, the last game to be released officially for the Super Famicom was Metal Slader Glory: Director's Cut in 2000 December 12, 2019 would see the game added to the Nintendo Switch's SNES library via its online service, allowing one to play the game legally on a full-fledged console.