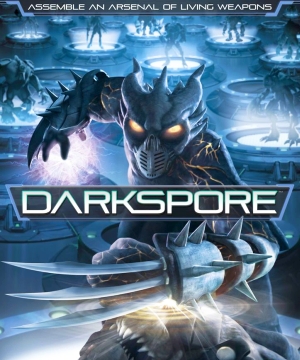 Darkspore is a spinoff of Spore, released on April 26, 2011. Imagine Diablo, with World of Warcraft item drops, and your heroes are Spore creatures.

According to the story, a race known as the Crogenitors were a space-faring race that were really good at altering DNA and created a bunch of "Genetic Heroes". Eventually, they discovered E-DNA (E being short for Exponential-DNA), an amino acid that could bring about evolutionary changes in hours that had previously taken millennia.

As experiments of this sort are known to do, the E-DNA project went pear-shaped quickly, causing the birth of a virus-like Hive Mind known as the Darkspore. Assimilating some Crogenitors and killing most of them (taking the Genetic Heros with them), the few surviving Crogenitors were put onto sleeper ships, to be awakened when their on-board computers had figured out how to use E-DNA without the whole "making Darkspore" result.

You take the role of one such Crogenitor, awakened after your onboard CPU has solved the corruptive properties of E-DNA. Rebuilding the Genetic Heroes of old, you're tasked with destroying all Darkspore.

There is now a wiki

On March 1, 2016 EA shut down the Darkspore servers, making the game unplayable due to its DRM scheme requiring an Internet connections. There are currently a group of fans who are making local servers to make the game run again, but it's not fully playable as of yet.