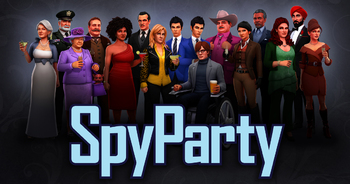 SpyParty is an Asymmetric Multiplayer 1v1 game made by Chris Hecker (Checker). One player plays as the Spy, the only human partygoer in a fancy cocktail party full of AI characters. The Spy has a limited amount of time to covertly accomplish a set of missions at the party. The other player is a Sniper with only one bullet, who is watching the party and must identify the Spy player from the many AI characters.

The game has been in development since 2009, with a long time in open beta, which has now been graduated to Steam Early Access on the 12th of April 2018.