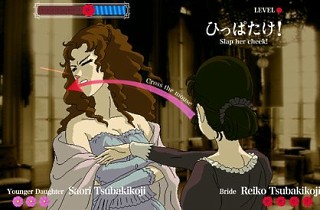 From Nigoro, the same people who made La-Mulana, comes a 2011 Adobe Flash game called Rose & Camellia

With Shunsuke, the eldest son of the Tsubakikoji family dead, his wife Reiko holds claim to being the head of the family and house. However, Shunsuke's sisters and mother object to this as Reiko was born a commoner. So with the family turning against her, what's a forlorn widow to do? Slap these bitches, of course! Join Reiko as she slaps all the women in the family until they accept her as the head of the household.

There's also a sequel released called Rose and Camellia 2 where Saori, the youngest daughter tries to claim the house from Reiko using the same methods as Reiko in the first game. It's available here

, in English, now, and without the need to play through the original.

Nigoro has also made a La-Mulana version where Mulbruk goes around fighting various other female characters for the title of main heroine. It can be played here.

This is the elegant art of feminine conflict: