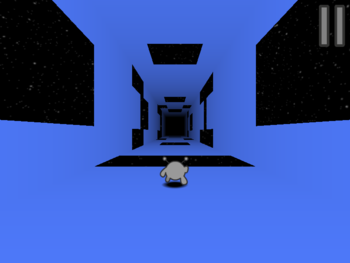 This is just the start.
Advertisement:

. It's much like other endless runners, except that every time you touch a wall, it becomes the new floor. In space.

It has two sequels. Run 2 introduces another player, adds optional bonuses, and makes the levels significantly blockier. Run 3 reverts to the old tunnels, adds an infinite running mode, an Excuse Plot, and plenty of new characters.

Run can be played here

, and it has a free mobile app.

Not related to the book Run.

The Run series as a whole provides examples of: