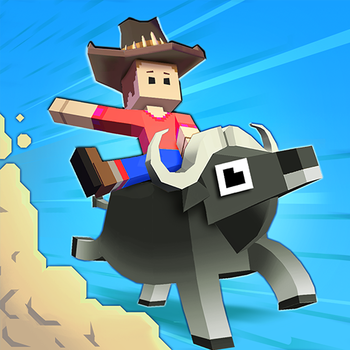 Rodeo Stampede: Sky Zoo Safari (or Rodeo Stampede for short) is a 2016 mobile game created by Yodo1, the publishers behind Crossy Road. A mix between an endless runner and a zoo management sim, Rodeo Stampede puts the player character, a Cowboy, in the middle of an Animal Stampede with all kinds of creatures. To add animals to your zoo, you need to lasso and hang onto them until you've befriended them, and as your zoo expands, you can get more income for upgrading your Power Up Mount, and later on, unlocking new content such as new maps or "rare animals" (novelty reskins of animals you've befriended).

The obligatory wiki is here