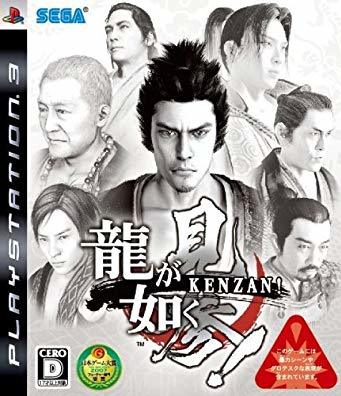 The legend of Miyamoto Musashi takes a turn for the wild.
Advertisement:

Ryu ga Gotoku Kenzan! (translates to "Like a Dragon Arrives!"; unofficially known by fans as Yakuza Kenzan) is a Spin-Off of the Like a Dragon series released exclusively for the PlayStation 3 in Japan on March 6, 2008. It is the third game overall in the franchise, developed primarily as a way for Sega and the developers of Yakuza to acclimate to PS3 hardware before moving on to the proper third installment in the Kiryu saga.

Set in feudal Japan during the 1600s, the game tells the story of real-life Japanese swordsman Miyamoto Musashi, albeit a fictionalized account. Musashi, who was once a member of the Tokugawa clan before retiring, works as a yojimbo (Japanese for "bodyguard") in Gion, Kyoto under the alias Kazumanosuke Kiryu. Five years after his retirement, a young girl named Haruka asks him to seek out a hitman going under Musashi's real name. Initially refusing the request, he takes it on after Haruka offers herself as a servant at a brothel in order to pay off the assassination, not wanting her to go down that path. Musashi's adventure then takes him on a journey to find the man impersonating him, and his reasons for doing so.

The gameplay remains very much the same as the rest of the series, with the main difference being the combat. While mechanically much the same as the mainline games, it is more Hack and Slash-oriented, allowing Kiryu to use and upgrade numerous swords of varying types in addition to using his bare fists. Additionally, Kiryu can switch weapon styles mid-battle, from Musashi's famous dual wielding to a large broadsword. This mechanic would later be refined into the much beloved style switching seen in Yakuza 0.

In addition to being the first Yakuza game to be released during the seventh generation, Kenzan is the first in the series to make use of motion capture technology in order to model the characters' faces after their voice actors, a practice that has been used in every single Yakuza game since.

Unlike the main series, Kenzan was not officially released outside of Japan. However, due to the PS3 not being region-locked, players outside of Japan are still able to play the game by purchasing a copy online. Fear not if you do not speak any Japanese, as the fansite KHHsubs have created a full English translation of the main story, which you can view on YouTube.

With the recent rise in popularity of the main series in the West, many fans have speculated whether or not Kenzan will ever get an official release stateside. While it does not seem likely, series producer Daisuke Sato said that he would love to see a Kiwami-style remake of the game, and that if it were to happen, it "could" be released in the West. Given that it was just a consideration, however, the claim should be taken with a grain of salt. In 2021, Sato once again expressed interest in remaking it, also considering doing so for its successor, but once again, it is only a consideration - however, with Sato having left Sega in October of that same year, a localization now seems unlikely, though with its below-mentioned sequel receiving a remake in early 2023, the possibility has increased somewhat, though it's still not likely as due to the game's age, it was confirmed that it would need to be completely rebuilt from scratch with no reused assets.

Kenzan received a follow-up six years later on both the PlayStation 3 and PlayStation 4, titled Ryū ga Gotoku Ishin! (English: "Like a Dragon Restoration!"), unofficially known by fans as Yakuza Ishin, which revisits the feudal Japan setting, this time taking place in the 1800s and telling the tale of Ryoma Sakamoto, another real-life figure in Japanese history.