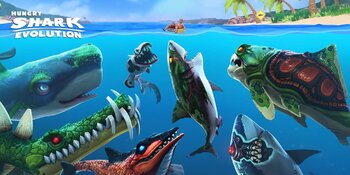 is a Future Games Of London Game for Android and iOS, released on October 18th, 2012. You control various sharks, starting with a reef shark, which you must level up to reach the next shark by eating everything you can. You can also upgrade your abilities with coins earned in game, and buy items with special bonuses and abilities in the shop for coins and gems. You can also buy special sharks any time after you score 350,000 points in one game. These sharks cannot be upgraded and don't retain their levels (though they level much faster to compensate), and have special abilities that set them apart from normal sharks. Most sharks also appear in game as enemy sharks, although they are much less powerful than your own shark of the same type. Every time you earn a specific amount of points, variable for each shark in game, you will enter a Gold Rush for a brief time, which makes you Nigh-Invulnerable, turns all creatures to gold, and prevents your health and boost from draining. A sequel titled Hungry Shark World was released in Oceania on December 14, 2015 and the rest of the world on May 4, 2016.