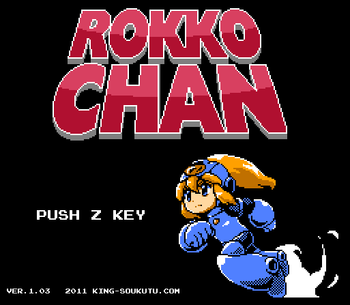 is a 2011 Adobe Flash Platform Game, created in faithful homage to the Mega Man franchise, specifically the classic games (with some elements from the X series thrown in).
Advertisement:

The plot revolves around Dr. Thane attempting to create a young Robot Girl with a human memory. He succeeds, but then she goes out to fight Dr. Mad, who is trying to Take Over the World with his six robots.

As of January 2021, the game became no longer playable from King Soukutu's website anymore due to the end of support of Adobe Flash. Despite this, some fans have managed to keep the game alive as a downloadable executable and it can be played offline, no longer needing to be played via a web browser. The game's downloadable version can be found here