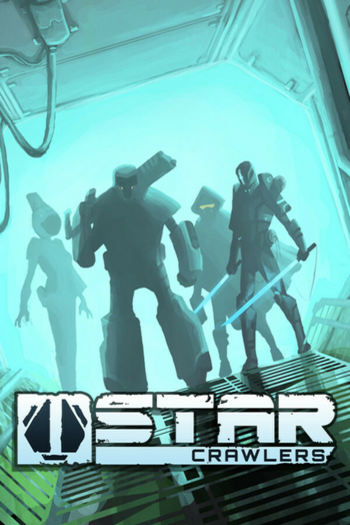 StarCrawlers is a Science Fiction First Person Dungeon Crawling RPG developed by Juggernaut Games. Set in a distant Post-Cyberpunk future ruled by an eclectic assortment of Mega-Corps, the player leads a team of "crawlers": adventuring guns-for-hire willing to do various shady and deniable doings for the numerous corporations and other organizations on the fringes of civilized space. Asset recovery, corporate espionage, personnel disputes, and general violence are all part of a day's work.

The player assembles a team from eight distinct character classes, outfits them with a variety of weapons, armor, shields, and accessories, and enters various complexes and dungeons looking for loot, violence, and hopefully a shiny payday at the end, all the while managing their relationships with the various corporations and organizations. Winning favor with particular corporations gets perks such as gear, tools, and support, while earning their enmity results in hostile repercussions.

The main storyline of the game focuses on the exploration of a massive, derelict colony ship known as the Stella Marin, whose population has vanished without a trace. While the player's team tries to uncover the truth, they find themselves getting wrapped up in a complex web of corporate politics between the ruling United Federation for Prosperity, the corporations resenting their strict rules, and the anarchists and workers suffering under both groups' profit-centered dominance.

The game was first released in Early Access in 2015, and received continuous development until its final release on May 23, 2017. It is available on GOG.com

for a sequel titled StarCrawlers Chimera was launched in May 2021, with a full release planned for the following year.