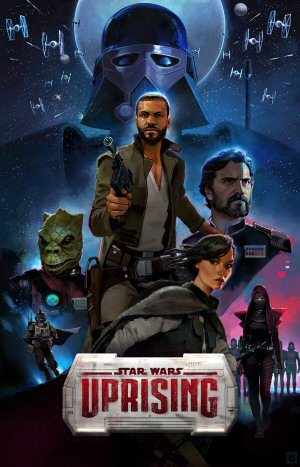 "Today, the Empire is victorious! The Rebellion is no longer a threat. The Rebels' desperate attack on the Emperor's Death Star has failed. Rumors of the Emperor's death are treasonous fabrications. For those of you who listen to these lies, who wish to test the Empire's strength, you will answer to me!"
— Moff Adelhard
Advertisement:

Following the events of Return of the Jedi, Darth Vader is no more, the Emperor is dead, and the galaxy is forever changed. As word of the Emperor's death quickly spreads throughout the galaxy Imperial forces struggle to maintain control. In the Anoat Sector, home to both Bespin and Hoth along with Burnin Konn, Imperial Governor Adelhard locks down the entire region. This "Iron Blockade" stops all incoming and outgoing space traffic and communications, trapping the people within.

Adelhard denies all "rumors" of the Emperor's death and kills anyone who speaks otherwise; while his second-in-command Commander Bragh, the leader of the dreaded Purge Troopers, ruthlessly crushes any hint of Rebellion. As the Alliance was chased from the Anoat Sector following their defeat on Hoth, their presence in this part of space is still relatively weak. Instead, smuggler groups, local assassins, crime cartels, and the former nobles of the sector have all banded together to form a rebel group of their own.

Announcement trailer can be viewed here

. Gameplay trailer can be viewed here

The game was shut down