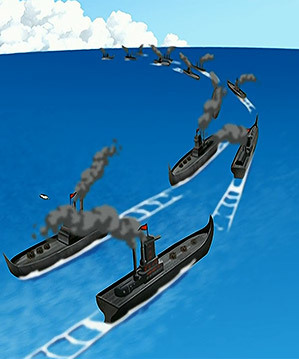 "What are they going to do, fly over us with magic powers?"
"Everywhere wood can swim, I find this flag of England."
— Napoléon Bonaparte
Advertisement:

A naval blockade is a tactic and/or strategy that prevents the movement of goods, supplies, and forces by sea. The greater the volume of traffic to be prevented, the greater the blockade—and the greater the resources needed to maintain it.

A close blockade is probably what most people think of, a fleet within weapons-range and probably the direct sight of the enemy. This works better for a visual medium. A loose or distant blockade is beyond the defenders' weapons-range and probably beyond their direct sight as well. A distant blockade will take place on the open sea, such as the one imposed by the Royal Navy in the English Channel and North Sea in both World Wars. A close blockade is often more effective, taking advantage of narrow inlets, but often entails more clashes with the enemy and operating further from one's supply and repair bases. How these would work in space depends on the author.

Under current rules of warfare, a blockade is an act of war. The dispatch of a trade-interdiction/blockade fleet is often an ultimatum to either agree to certain terms or declare war.

There are always those foolhardy enough to try Running the Blockade.

May overlap with Gunboat Diplomacy. Contrast Hold the Line, for when the good guys are trying to keep their enemies from overrunning their position, and Easy Logistics, which this is used to counter.