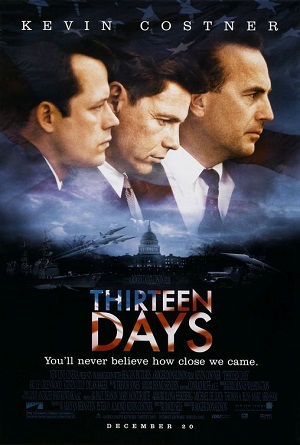 "Say one of their ships resists the inspection, and we shoot out its rudder and board it. They shoot down one of our planes, in response. So we bomb their anti-aircraft sites — in response to that... they attack Berlin. So we invade Cuba... and they fire their missiles... and we fire ours..."
— President John F. Kennedy
Advertisement:

On an uneventful morning in October 1962, during President Kennedy's term in office, a series of disturbing photographs are brought before the administration. U2 spy plane coverage reveals that the Soviet Union has started to deploy offensive nuclear weapons in Cuba in secret.

The military brass advocates swift intervention by the Army to eliminate the threat to U.S. national security, but the more levelheaded Kennedy initiates a quarantine of Cuba to prevent more Soviet nukes from coming in while retaining the option for diplomacy. While the generals try to arrange a war and the Soviets try to run the blockade, Jack, Bobby, and Kenny have to maneuver the political field to keep the crisis from escalating into all-out nuclear warfare.