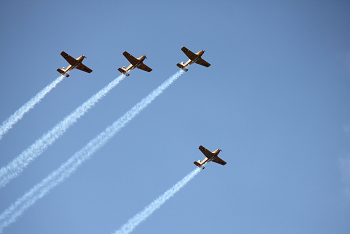 is a form of Due to the Dead performed by fighter jet pilots. It consists of a flight of aircraft performing a formation pass over a fellow pilot's funeral, either with one position conspicuously empty or with one pilot sharply pulling away (straight up or up and sideways) just over the site while the others maintain course.

Although primarily used in the military air force context, its variants can be used in other situations, as well. Compare Empty Chair Memorial, 21-Gun Salute, and Riderless Horse.

Since this is often a Death Trope, beware of spoilers.