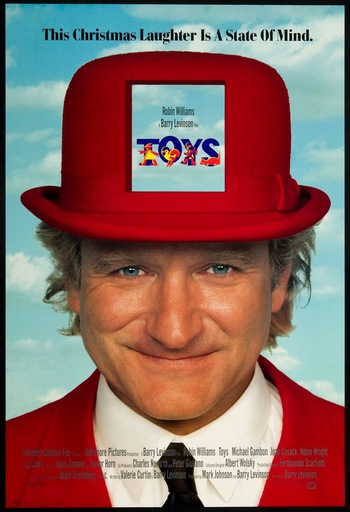 Make believe, not war.
If I cannot bring you comfort
Then at least I bring you hope
For nothing is more precious
Than the time we have, and so
We all must learn from small misfortunes
Count the blessings that are real
Let the bells ring out for Christmas
At the closing of the year
Advertisement:

Toys is a surreal 1992 comedy directed, co-written, and co-produced by Barry Levinson. Supposedly it was the film he had always wanted to make, but the film was generally not well received by either critics or audiences; Levinson was given a Razzie nomination, while the film earned two technical Academy Award noms.

Robin Williams plays Leslie Zevo, a man who gets passed up for the inheritance of the toy factory and company of his father Kenneth (Donald O'Connor) despite his dedication because he has never really grown up himself. Instead, Kenneth leaves the factory to his brother, General Leland Zevo (Michael Gambon). This turns out to be a bad move, since the general and his camouflage-obsessed son Patrick (LL Cool J) soon bring an absurdly strict security regime to the factory and even start planning to use toys as secret war machines. (To put it in pithier terms, this plot is effectively Willy Wonka and the Military-Industrial Complex.)