Film / Too Much: The Robot With a Heart 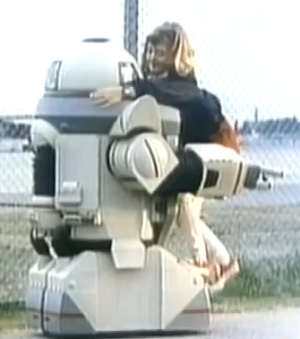 The sad lyrical music playing during this scene has to be seen in person to be believed.
Advertisement:

Susie's parents have taken her on a trip to Japan as they visit her uncle Tetsuro, a roboticist. Bored and with no-one to play with, Susie discovers a robot that's somewhat human-like: it talks with a simple voice, can do all sorts of things, and wants to play. After accidentally naming it "Too Much" ("TM" for short), Susie grows very fond of the robot.

However, all things must come to an end, and Susie is told the vacation is over and she'll need to go back home. She sneaks out with Too Much, and they end up being chased around Tokyo by the police, concerned citizens, and rival roboticists. She later meets a local boy, Mata, and he joins them.