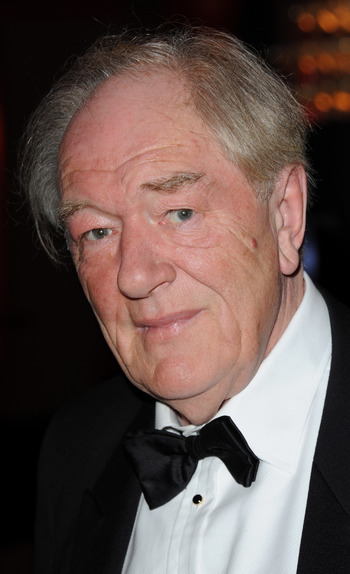 "Every part I play is just a variant of my own personality. No real character actor, of course, just me."
Advertisement:

Probably best known for playing Albus Dumbledore in the third and subsequent Harry Potter series of films, but his career is much broader than this. He was already an accomplished stage actor when he got his big break on television in The Singing Detective. Since that breakthrough role, he's divided his time between stage, film, and television, with equal panache in each medium.

On the Top Gear track, the final corner ("Gambon") is named after him after he nearly rolled the car and went around it on two wheels. In addition to the above, Gambon is also known for his roles in these works. His last major role was The Film of the Series of the classic Brit Com Dad's Army.

Unfortunately, Gambon has had to retire from stage acting due to his deteriorating memory, though he is still working in film and television.