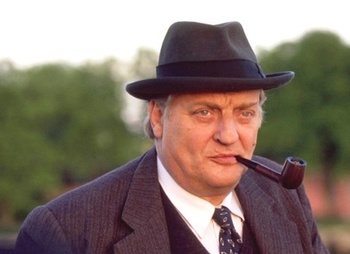 Bruno Cremer, who portrayed Maigret on French television from 1991 to 2005. Often considered as the definitive portrayal.
Advertisement:

If you are searching for a French answer to Sherlock Holmes and Hercule Poirot, look no further.

Parisian police commissioner Jules Maigret is Georges Simenon's most famous literary character, and a prime contender for the title of most famous fictional French detective (his author was Belgian, however).

The unflappable bourgeois sleuth starred in 81 novels, 28 novellas and a number of short stories from 1931 to 1972, calmly smoking his pipe and using his knowledge of psychology and patient routine investigation to understand the motives of the people he investigated to solve his cases. As being part of the police implies, he's not a Private Detective, but his methods and results easily rival the genre's biggest names.

Maigret has been adapted for radio, film and television numerous times since The '30s in France and abroad including Italy, the UK and even Japan.