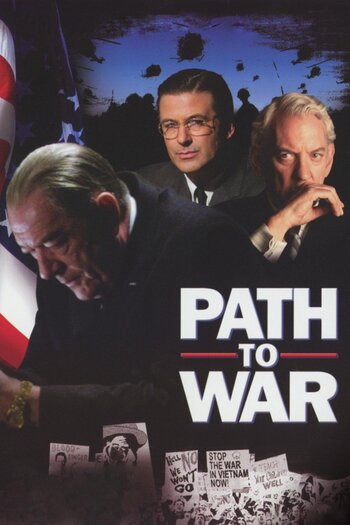 Lyndon Johnson: I shoulda cleaned house November '63, got rid of all of 'em, McNamara, Bundy, Connally, I knew those fuckin' Kennedy-lovers would be disloyal to me! All of 'em!
Clark Clifford: They only advised you, Mr. President. You decided. Against all your natural instincts, against the whole of your life experience... you decided.
Advertisement:

Path to War is a 2002 HBO television film and the last work of its director, John Frankenheimer. It stars Michael Gambon as President Lyndon Johnson, Alec Baldwin as Secretary of Defense Robert McNamara, and Donald Sutherland as presidential advisor Clark Clifford, who succeeded McNamara as Secretary of Defense.

1965: Following the largest electoral landslide in U.S history, LBJ is confirmed as the President of the United States, and he has big plans for the country. "The Great Society". A chance to make the land that all Americans dream of. Healthcare, education, welfare and civil rights reforms. He and his cabinet intend to eliminate poverty and racial injustice. But the drums of war are beating in South-East Asia...

As The Vietnam War escalates far beyond the proposed estimates of his cabinet and generals, LBJ finds himself leading a country that is torn apart by the escalation of the war and the requirements needed to win.

The film dramatizes the tragedy of a President who went along with the plan and the best experts he had, for a war he really did not want, and was ultimately destroyed by it.

This Movie provides examples of: