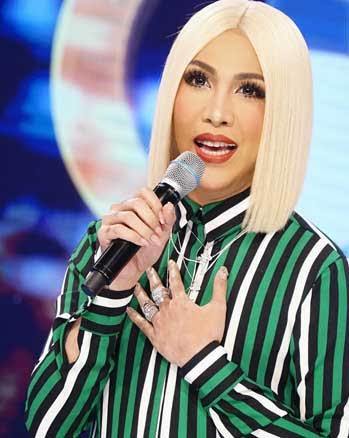 The Unkabogable.
Depending on who you ask, Vice Ganda (born Jose Marie Borja Viceral on 31 March 1976 in Manila, Philippines) is either one of the Philippines' greatest comedians with a number of box-office draws to his belt, or a crass comedy club act whose main claim to fame is taking the mick out of people in the most demeaning way imaginable.
Advertisement:

The son of a slain barangay captain and an overseas worker, Vice started off as a stand-up comic in various gay comedy clubs in Manila before venturing into showbiz. Vice initially played bit and supporting roles in various comedies and dramas during the late 90s to the early 2000s, until he gained mainstream recognition as one of the main hosts in It's Showtime, further paving the way for being the star of several Metro Manila Film Festival entries and other blockbusters, eight of which were considered as some of the highest-grossing films in Philippine cinema. Following his box-office successes, he has also authored two best-selling books, one a comedic essay depicting himself as the president of the Philippines and the executive orders he would impose should he be in office, and more recently a memoir focusing on his youth in Tondo.