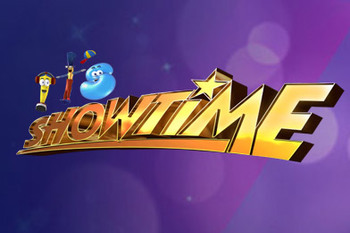 It's Showtime is a Philippine noontime musical variety show broadcast on ABS-CBN. The show is also broadcast worldwide through The Filipino Channel.

The show is currently ABS-CBN's longest-running daily noontime variety show, having surpassed the original run of Magandang Tanghali Bayan (lit. Good Afternoon, Nation) which aired from 1998 to 2005. It's Showtime was initially aired as a variety talent show before Wowowee, as a replacement for the SMS-themed game show Pilipinas, Game Ka Na Ba?, with its contestants mostly comprising of dance groups from throughout the country, but following a pair of short-lived variety shows which filled in the time slot of the beleaguered Wowowee, namely Pilipinas Win Na Win and Happy Yipee Yehey!, It's Showtime, then known as simply Showtime, was retooled with new long-term segments, while the original competition format returned once again as one of its special segments.

It's Showtime provides examples of: