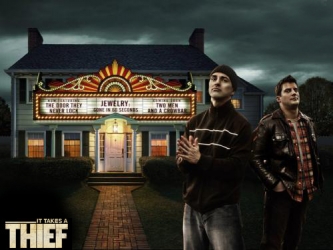 Because to catch a thief, It Takes a Thief.
Advertisement:

It Takes a Thief is a Reality Show that aired on the Discovery Channel between 2005 and 2007. It starred two former thieves (Matt Johnston & Jon Douglas Rainey) who had reformed their lives; Matt had become a schoolteacher, and Jon a private eye. The episodes consist of them finding a homeowner who has very lax security on his/her home, which they then rob with the homeowners' consent, in exchange for a full upgrade to the security in their home. This robbery is filmed on an ad-hoc CCTV system installed in the house by the show's technical staff, and is played back for the viewing audience in real-time (burglaries that take over 10 to 15 minutes are edited for time). The homeowners must secure their house normally.

Matt usually comments on the robbery in progress while watching the CCTV in a nearby van, while Jon cases and then robs the houses. The homeowners then return to their houses (either with Matt or, in later episodes, independently) to survey the damage that Jon caused while robbing their house. Invariably, despite the fact the homeowners know they are going to get everything back, they are always devastated to discover how vulnerable they were, and being robbed (even with their consent) makes them feel violated.

After Matt calms the upset homeowners down after they are forced to confront what they could lose, the two hosts then help them get properly secured so that they can prevent being robbed in the future.

They then return about two weeks later to attempt to break into the house to make sure that the family has actually improved their habits. In about half the cases, despite the family knowing there will be a second robbery attempt, they're still able to break in again!

Not to be confused with the identically named 1968-1970 Spy Fiction series starring Robert Wagner. That show has its own entry.

It Takes a Trope: