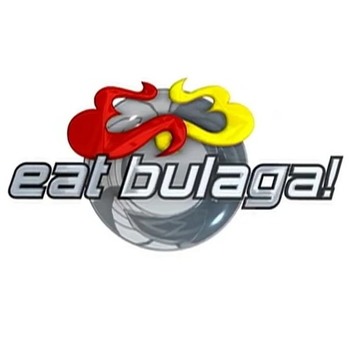 Mula Batanes, hanggang Jolo...note "From Batanes to Jolo..."; the original lyrics began with "Mula Aparri hanggang Jolo" but was later changed to better denote the northernmost part of the country.
Eat Bulaga!note The name is a play on the playground expression "It! Bulaga!", "bulaga" meaning "peekaboo". Roughly translated into English, Eat Bulaga! would be Lunchtime Surprise! is a Filipino variety show produced by Television And Production Exponents Inc and broadcast by GMA Network. It began in 1979 on RPN-9 and transferred to ABS-CBN in 1989 and then GMA in 1995 amid ABS-CBN's attempt to acquire Eat Bulaga's rights, and has since aired over 10,000 episodes; it has the highest episode count for any Filipino TV show.
Advertisement:

The series is hosted by mainstays referred to as "Dabarkads"note A corruption of the Tagalog term "barkada", meaning a band of friends. and consists of various game and talent show segments along with live performances from the hosts and/or guest acts.

An Indonesian version called Eat Bulaga! Indonesia also aired from 2012 to 2019, making it the first time that a Filipino television program was franchised by another country. This is then followed by another overseas franchise, Eat Bulaga! Myanmar, which was announced on July 30, 2019 in time for their 40th anniversary.