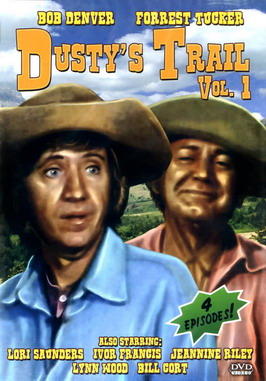 Dusty's Trail was a 1973-1974 series, starring Bob Denver and Forrest Tucker about a stagecoach and wagon lost from their train en route to California. Many have interpreted it as basically Gilligan's Island in the Old West, and both shows were created by Sherwood Schwartz.

Ranked by What Were They Thinking? The 100 Dumbest Events in Television History as the 59th worst event.

A number of the episodes are in the public domain. The original negatives to all episodes are currently owned by Disney through 20th Century Studios (successor to Metromedia Producers Corporation, which originally produced the series).