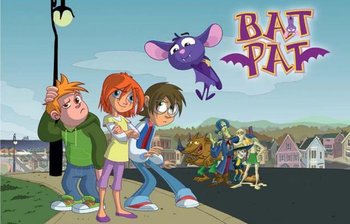 From left to right: Leo, Rebecca, Martin, Bat Pat.
Bat Pat is an Italian series of children’s horror books written by Roberto Pavanello, as well as an animated series based on these books.
Advertisement:

The books and series both resolve around the talking, purple bat Bat Pat. Along with his 3 human friends, the siblings Martin, Leo and Rebecca Silver, he investigates supernatural events in his hometown of Smogville (bookseries)/Fogville (animated series), and writes books about his many misadventures.

The series is available on Netflix. Needs some Wiki Love!