Series / Inday Will Always Love You 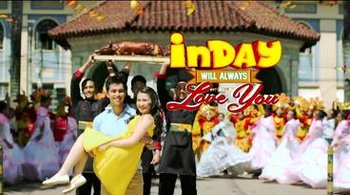 Inday Will Always Love You is a Romantic Comedy Filipino drama television series directed by Monti Puno Parungao and Rember Gelera and is broadcasted on GMA Network. The pilot episode was shown on May 21, 2018 on the network's Primetime Telebabad block. The series stars Barbie Forteza (as Happylou "Inday" Magtibay-Fuentes), Derrick Monasterio (as Patrick Melendez) and Juancho Trivino (as Ernest Pascual) as the main characters.

Happylou finds work in Cebu as an assistant in a lechon store in order to support her family living along train tracks in Manila as well as to search for her father whom she never met. She eventually finds the answers to her life-long questions alongside various characters who would either make life sweeter or more difficult for her.

Inday Will Always Love You contains trope examples of: