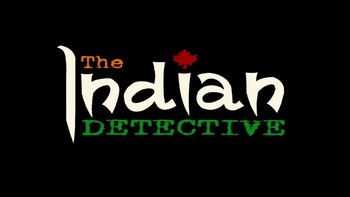 The Indian Detective is a 2017 comedy/drama miniseries that aired on November 30, 2017 on CTV and it had an overseas release via Netflix on December 19, 2017. It stars comedian Russell Peters, who also had a hand in helping with the show's script, some of it based on his experiences as an Indian-Canadian. The creators consist of Frank Spotnitz and Smita Bhide. Four episodes are directed by Sandra Johnson.

Doug D'Mello is an experienced Indian-Canadian police officer with the Toronto Police Service who worked on a case of drug trafficking from New York to Toronto when he botches an investigation after initially getting into a Jurisdiction Friction situation with the Canada Border Services Agency. Due to this and partially over his Cowboy Cop attitude, Doug is suspended for a month.

Doug visits his father Stanley after being told that he's supposedly dead in a Mumbai hospital, except that he overreacted. He gets involved in investigating criminal activities in Mumbai after his father told a local that Doug's a detective at the TPS, when he's just a constable. He later investigates other crimes that are tied with a corrupt Canadian businessman and Mumbai-based organized crime.

Peters has said a second season is in the works since 2017, but so far none has been released.