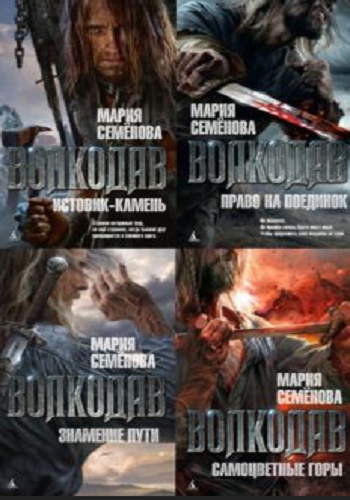 Wolfhoundnote "Волкодав", Volkodav in Russian is a series of a Low Fantasy novels by Russian fantasy and Historical Fiction author Maria Semyonova.
Advertisement:

He was condemned to death, but survived to wreak revenge for the murder of his clan. The last member of the clan of the Grey Hounds became a fearless warrior by the name of Wolfhound. After cheating death in the mines, Wolfhound sets out on a journey with his constant companion, the Earthbound Bat. Wolfhound has but one desire – to destroy the Maneater, a merciless warrior who slaughtered the village of the Grey Hounds.

After making the long journey to the Maneater’s castle, Wolfhound finally conquers his archenemy. He doesn't hope or want to survive, but fate, it seems, has other plans for him. He frees two prisoners, the sage Tilorn and slave-girl Niilith and travels with them to the city of Galirad, where the king is giving his daughter away in political marriage to a young warlord Vinitar.

The king's daughter Princess Elen must travel to the land of her new husband, and asks Wolfhound to be her guard in this long and dangerous journey. Wolfhound agrees to serve the princess and is caught up in a whirlwind of unexpected events...

The second book explores new adventures of Wolfhound and his long-time companion, the young scholar Eurych. The third and the fourth books see Wolfhound eventually finding his way back to the Jewel Mountains, the hellish slave mine he had once escaped from, to destroy this place once and for all.

There are also two books predating the events of the main series: The Ultimate Stone, a story of young Wolfhound (then Pup) surviving and escaping the slave mines, and its direct sequel Peace on the Road, published in March 2014, which tells about the travels of Wolfhound and his mentor, Mother Kendarat.

In 2006, a film of the book was produced in Russia under the title Wolfhound of the Clan of Grey Houndsnote "Волкодав из рода Серых Псов", Volkodav iz roda Serykh Psov. In 2007, there was produced a TV series Young Wolfhound, serving as a prequel to the film. The film and the TV series, while having many common plot points with the books, basically form a separate continuity.

Now has its own character sheet

Tropes in the books: