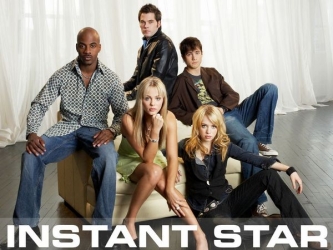 Instant Star was a Canadian Soap Opera and Teen Drama created by Linda Schuyler (the same woman who created Degrassi: The Next Generation). Lead character Jude Harrison, an amatuer singer-songwriter musician, wins an American Idol-type competition and recording contract and is instantly thrust into the world of celebrity and fame. She has to overcome problems with both her personal and professional life, such as her parents' divorce and maintaining her career and pleasing her record label.

The show, like Degrassi, is very much like a Soap Opera, oftentimes outdoing Degrassi with completely outlandish plots and characters. But also like Degrassi, it is balanced with a teenage realism and feel. The soundtrack to the series is pure teen pop, which pretty much makes this show the ultimate Guilty Pleasure. It aired on CTV in Canada and on Noggin's teen block, The N, in the United States.

This TV show has examples of the following: