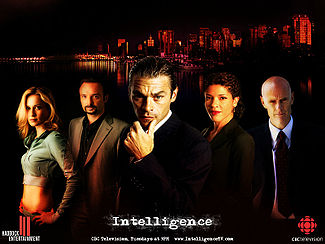 "It's a complicated world now, eh, Jimmy? People changing sides all the time. You almost need a scorecard to figure who's f—in' who."
Advertisement:

A Canadian crime drama, running from 2006 to 2007, which blended elements of Police Procedural, Criminal Procedural, and Spy Fiction. Written and produced by Chris Haddock, the creator of the acclaimed Da Vinci's Inquest, it might best be described as Xanatos: The Series.

Set in Vancouver, the show follows the escapades of Jimmy Reardon (Ian Tracey), a third-generation crime lord who specializes in smuggling and distributing marijuana throughout Canada and the Northwestern United States, and Mary Spalding (Klea Scott), the ambitious head of the Vancouver Police Department's Organized Crime Unit (OCU), who is eyeing a promotion to director of Asia-Pacific affairs for the Canadian Security Intelligence Service (CSIS), Canada's answer to the CIA. Seeing an opportunity to advance each other's interests, the two form an uneasy truce, with Jimmy serving as Mary's most important new source of gangland intelligence in exchange for protection from criminal prosecution.

But all is not well in Vancouver. Mary's Machiavellian deputy, Ted Altman (Matt Frewer), looking to advance his own standing, conspires against her with CSIS director Roger Deakins (Tom McBeath), the man she is aiming to replace, and eventually decides that the easiest way to undermine her will be to have Jimmy busted by his contacts in the American Drug Enforcement Administration (DEA). Jimmy, meanwhile, seems pulled inexorably into open warfare with Dante Ribiso (Fulvio Cecere), the rapacious leader of a local biker gang, just as he has made a risky and expensive investment in a series of ATMs for a money laundering scheme.

Other subplots involve the discovery that a Chinese Triad has planted a mole (Rick Tae) in the OCU and the possibility that the CIA has planted another in CSIS, Jimmy's often futile efforts to deal with his vindictive ex-wife Francine (Camille Sullivan) and well-meaning but incompetent brother Michael (Bernie Coulson), a plot by an American agribusiness to steal Canadian trade secrets, and an arms deal between a fugitive cocaine smuggler (Hugo Ateo), a crooked stockbroker (Bill Mondy) looking to diversify, and a DEA agent (Aaron Pearl) who may or may not have gone rogue.

And that's just the first season.

Despite widespread critical acclaim, culminating in a Gemini Award for Best Dramatic Series in 2007, the series was abruptly cancelled after two seasons, amid rumors that it was killed for political reasons over its negative portrayal of American intelligence agencies, law enforcement, and big business.

Not to be confused with the sci-fi drama Intelligence (2014).