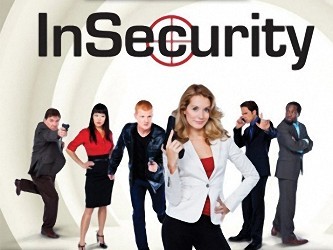 A Canadian action-comedy and Work Com InSecurity is a parody of modern spy fiction, once labeled as "24 minus Jack Bauer.", that premiered on CBC in 2011.

The show follows a team of agents who work for the fictional National Intelligence and Security Agency (NISA), a Canadian intelligence agency centred in Ottawa. Essentially a latter-day Get Smart but with more Canadian-ness, the show follows the basic character template of all Canadian shows (Deadpan Snarker, Butt-Monkey, Only Sane Man, etc.) and drops it into an espionage-themed setting.

InSecurity was conceived by Robert de Lint and Virginia White (a director and executive producer of Corner Gas, respectively) who then approached Kevin White (showrunner of Corner Gas). The original pilot revolved around the tedium in electronic surveillance work, but it was rejected on the grounds of being too niche and a second pilot was done in a more 24 style. The show was picked up for thirteen episodes and premiered on January 4, 2011. The first episode was viewed by 740 000 people. (Doesn't sound like a lot by American standards, but it's a respectable audience up here.)

A second season was aired and a DVD release for the 1st season is out there. However, the series won't be continued due to budget cuts made by the Canadian federal government for 2012.

Has absolutely NOTHING to do with the similarly named strip.

Head here for the Shoutout page.