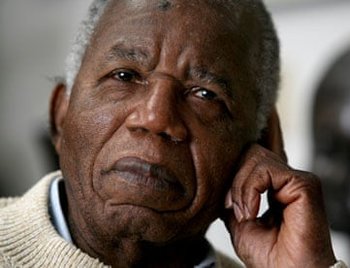 "When suffering knocks at your door and you say there is no seat for him, he tells you not to worry because he has brought his own stool."

Chinua Achebe (b. Albert Chinụalụmọgụ Achebe, 1930–2013) was one of, if not the most significant 20th century African author and literary star to emerge from the continent. Achebe was born in an Igbo village in British Nigeria to Pentecostal parents into an era when the continent was undergoing the transition from colonial Protectorate to emerging nation state.

From the publication of Things Fall Apart in 1958 Achebe's works dealt with themes of the effects of colonization on the African people, tribal customs, gender roles and the desire of Africans to write tell their own stories following years of having only limited representation by White and European authors.

He is particularly famous for challenging the depiction of Africans in Joseph Conrad's novella Heart of Darkness which he deemed dehumanizing and racist despite Conrad's intent to illustrate the exploitation of Africa by Europeans.

Alongside helping establish African literature on the world stage Achebe was actively involved in continental politics, becoming a representative for the short-lived Republic of Biafra during the Nigerian Civil War which would weigh heavily on him when the Nigerian government restricted his travel.

In 1990 Achebe was left paralyzed from the waist down following a traffic accident leaving him to reply on the use of a wheelchair and remain permanently in the United States for medical care. After a short illness Achebe passed away in Boston in 2013.