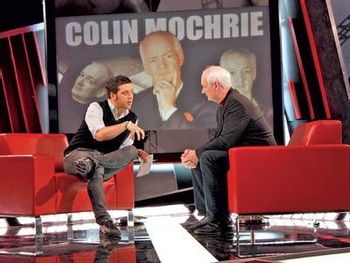 Does Colin Mochrie have to do a cameo in everything?
Advertisement:

The Hour was a late night Canadian Talk Show running from 2009 to 2014, produced and broadcast by the CBC and hosted by George Stroumboulopoulos, a former VJ from MuchMusic, a Canadian music channel. For obvious reasons, his last name is often shortened to just "Strombo". He also hosts The Strombo Show on CBC Radio 2.

In 2012-14, the show was shortened to half an hour and renamed "George Stroumboulopoulos Tonight". The show was cancelled when Strombo quit to begin hosting Hockey Night in Canada.