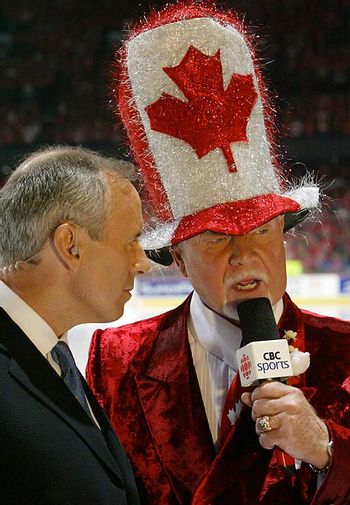 Ron MacLean (left) and Don Cherry, the latter seen modelling an understated little number.
"Hello Canada, and hockey fans in the United States and Newfoundland..."
— Foster Hewitt, introducing the broadcasts back before Newfoundland was part of Canada
Advertisement:

The oldest live sports broadcast still on the air, anywhere—having begun on radio in 1931 and airing continuously on CBC television since 1952—Hockey Night in Canada is, in many ways, as much a cultural touchstone for the country as a mere sports telecast, partially because of this history. HNIC is broadcast in multiple languages (including, of all things, Punjabi) and, by virtue of being on CBC, is available anywhere in the country even if you don't have cable. During the regular season it airs games on Saturday night; in the spring the playoffs largely take over the CBC TV prime time schedule. (In the United States, HNIC airs on NHL Network and can also be picked up in places near the Canadian border with access to CBC affiliates.)

Each game has two 18-minute intermissions per standard National Hockey League rules, which the telecast uses for player interviews, documentary features, and commentaries. Each week sees at least two games, and sometimes as many as four, regionally divided, over the course of an evening. The playoffs will usually see at least one game aired each day, until team eliminations leading up to The Stanley Cup Finals start to thin the ranks.

In the 1970s, animated cartoon segments starring "Peter Puck" (produced by Hanna-Barbera and shared with NBC's Hockey Game of the Week in the US) were shown to illustrate to newbies the basics of the game like its rules, equipment and officials. Decades later, the character was revived exclusively for the CBC.

In 2014–15 NHL season, the HNIC rights shifted to Rogers Communications' Sportsnet arm as part of the league's new Canadian national TV deal. The coverage, now produced by Sportsnet, continued to air on the CBC as well as on the Sportsnet, Citytv, and FX Canada channels. Furthermore, former CBC talk show host and rock DJ George Stroumboulopoulos was made the new host, replacing Ron MacLean (who continued to do "Coach's Corner" with Don Cherry, but switched to hosting the new Rogers Hometown Hockey broadcasts on Citytv). The majority of HNIC's other existing personalities and commentators were hired by Rogers to continue their roles under the new regime. However, the broadcasts drew lower than expected ratings and Stroumboulopoulos was eventually replaced by a returning MacLean as the main host.

A popular segment in the first intermission was "Coach's Corner", which was co-hosted by MacLean and Don Cherry, the latter an opinionated (and loudly-attired) former coach who commented about the sport with its various players and games. However, Cherry was also a controversial figure due to his loud rants (which were often at best only tangentially about hockey) and his penchant for insulting various people (including foreign players from Europe, players who wore protective face visors, and veteran players who spoke out about health issues related to the sport such as concussions and fights). While such comments drew complaints over the decades, CBC and later Sportsnet tolerated Cherry's antics for the high ratings he drew. Finally on November 9, 2019, Cherry went too far when he complained about "You people... who come here" not wearing Remembrance Day poppies, which drew a wave of condemnations for what was perceived as a hateful xenophobic smear against immigrants. These include an overwhelming flood of complaints to the Canadian Broadcast Standards Council and an official denouncement by the Royal Canadian Legion who distributed those poppies for veterans charities. As a result, under immense pressure from protestors, and likely advertisers who had lost their patience with him, Cherry was fired by Sportsnet on Remembrance Day itself (November 11), and "Coach's Corner" was ended.

HNIC's long-running instrumental theme tune ("The Hockey Theme", written by Dolores Claman in 1968) has been referred to as "Canada's second national anthem." Unfortunately, due to complicated legal issues, CBC lost the rights to the theme to rival network TSN in 2008. CBC ran a contest inviting the public to create a new theme tune and the winner was Colin Oberst's "Canadian Gold". Quoted, appropriately, in the intro to the Propagandhi song "Dear Coaches Corner", which criticizes the segment for thrusting conservative political commentary during a sports game.