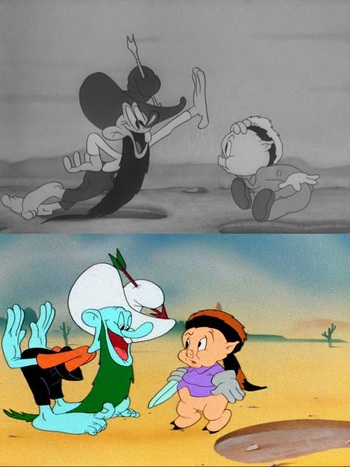 "Wagon Heels" is a 1945 Looney Tunes cartoon, starring Porky Pig and directed by Bob Clampett. It is a remake of a 1938 Porky Pig cartoon also directed by Clampett, "Injun Trouble"note not to be confused with the 1969 Robert McKimson cartoon of the same name.

The cartoon opens in 1849, with a map showing a sliver of land on the Eastern Seaboard labeled "USA", with all land to its west labeled "INJUN JOE'S TERRITORY". Porky is leading a wagon train to California and is warned to watch out for a Native American "Super Chief", named Injun Joe. Along the way, both Porky and Injun Joe are repeatedly interrupted by a goofy bearded hillbilly named Sloppy Moe, who keeps repeating, "I know something I won't tell, I won't tell, I won't tell!" to the tune of "London Bridge is Falling Down"...