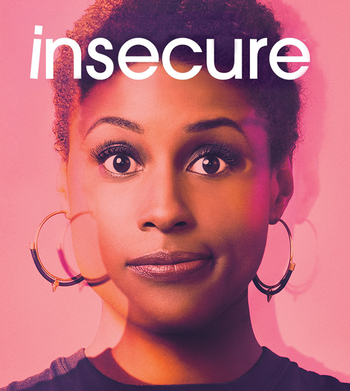 Insecure is a 2016 HBO series created by Issa Rae and Larry Wilmore, based (partially) on the former's web series Misadventures of Awkward Black Girl.

Rae stars as Issa, a young woman working for a nonprofit organization whose looming thirtieth birthday prompts her to start rethinking her life choices, including whether or not she should dump her deadbeat boyfriend Lawrence.

Issa's best friend Molly, however, seems to have it all together — except when it comes to romance. Despite her job as a successful lawyer, she can't seem to find a man worth keeping.

Insecure has received lots of acclaim since its debut, thanks in part to its nuanced portrayals of blackness and female friendship, as well as carrying over all the aspects of Awkward Black Girl that made it work with viewers.

It was announced in 2021 that the fifth season would be its last. It officially ended on December 26th that same year.