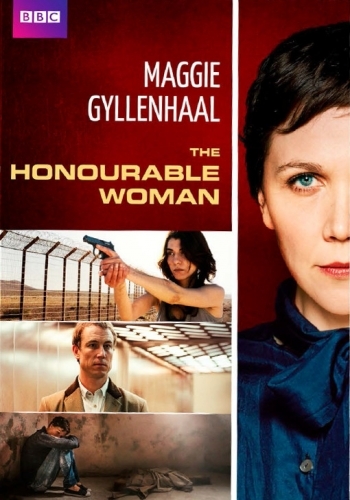 A 2014 TV Mini Series by the BBC and Sundance TV, The Honourable Woman is a cross between a British Conspiracy Thriller and a Spy Fiction, starring Maggie Gyllenhaal as Nessa Stein, an Anglo-Israeli businesswoman whose company, the Stein Group, has spent the last several years building a network of optical cables between Israel and the Palestinian Territory, in an effort to sponsor peace in the area. On the day that Nessa announces that their business partner for the final phase of the network is to be a Palestinian company and not the Israeli company that built the first two phases, the head of said Palestinian company is found hanging by his neck from a flagpole outside his London hotel room.

Then it starts to get complicated. In a flashback, we learn that Nessa and her brother Ephra are the children of Eli Stein, an arms manufacturer who sold weapons to Israel in large amounts, and that Eli was assassinated in a London hotel dining room in front of Nessa and Ephra when they were both children. When they both grew up, Ephra took over the family business but by then the Stein Group was making IT technology, not weapons, in an attempt to atone for their father's behaviour. However, seven years previous to the present action, Nessa took over control of the business and Ephra took control of the less-significant Stein Foundation, which sponsors academies in Israel and the West Bank which are open to both Israeli and Palestinian students. Ephra lives with his wife Rachel, who's expecting their third child; with Ephra and Rachel also lives their housekeeper Atika, a Palestinian woman who is a close friend of Nessa, and her son Kasim. Then, one night at a classical concert in the middle of London, Kasim is kidnapped.

And with that, the whole thing starts to unravel. MI6 gets involved, Nessa's past turns out to be a great deal more complicated than everyone thought, characters start getting unexpectedly shot in the head and it all turns into a gripping drama about the terrible moral compromises involved in the Arab–Israeli Conflict.

Written, produced and directed by Hugo Blick, The Honourable Woman got rave reviews from more or less everyone, Maggie Gyllenhaal got a Golden Globe for her performance as Nessa, and Stephen Rea was nominated for a BAFTA award for his performance as Sir Hugh Hayden-Hoyle, head of MI6's Middle East desk. Word of God says that there will be no series 2, and that the story has been told.

Because this show is a thriller in which much depends on the timely revelation of information that was not previously known, much of its tropiness has had to be concealed for spoiler-related reasons.

This Miniseries contains examples of the following tropes: