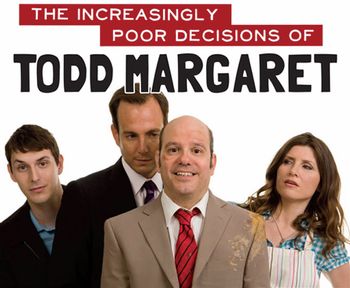 Things are going to get worse...
Advertisement:

The Increasingly Poor Decisions of Todd Margaret is a sitcom produced by IFC and RDF Television that airs on IFC in the US and on Channel 4 in Britain. The show stars David Cross as Todd Margaret, a low-level employee who, due to a comedic misunderstanding, is selected by his jerk boss Brent Wilts (Will Arnett) to travel to London to sell a North Korean-made energy drink called Thunder Muscle. Although Todd claims to be familiar with British culture, it soon becomes apparent that all he is familiar with are broad outdated stereotypes. Needless to say, hilarity ensues.

Todd’s only employee in London is Dave (Blake Harrison), a native Briton who quickly realizes that Todd has no idea about British culture or selling energy drinks and does all he can to take advantage of and embarrass Todd. Rounding out the main cast is Alice (Sharon Horgan), a restaurant owner who dreams of being a molecular gastronomer, who Todd quickly falls for, much to her chagrin.