Animation / Jet and the Pet Rangers 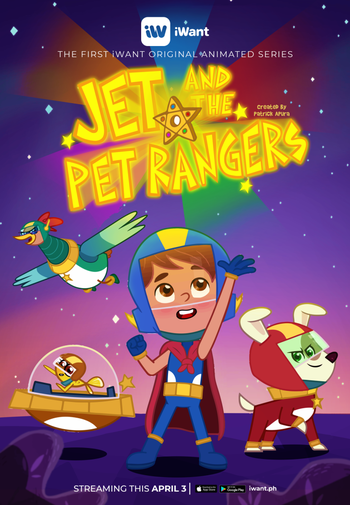 "In the far depths of the galaxies, a magical star fell towards Earth. Every animal looked up to the sky, their eyes glimmering with hope. This was the night their heroes were chosen. Three brave pets were appointed to preserve animal life alongside a young boy."
Advertisement:

Jet and the Pet Rangers is a Filipino Edutainment Show created by Patrick Apura and produced by Studio Nonego. As the Opening Narration explains, the show follows the adventures of a kid named Jet who, together with his pets Liksi the dog, Tiyang Manok the hen, and Gigi the goldfish, transform into superheroes with the help of a magic star. When an animal in the neighborhood encounters trouble, Jet and his Pet Rangers speedily locate them and come to their rescue.

The show was the first original animated series to be released on the iWant service, owned by the ABS-CBN Corporation. It premiered on April 3, 2020 with seven episodes. No English dub was produced (despite what the series title might indicate), though the first episode